The 2 tones IMD TX DR test you found below in HAMRADIOWEB forum for the RM
Italy HLA 305  HF Linear Amplifier was made by 2 tones audio (700Hz and 1900Hz) modulating on SSB mode a brand new Kenwood TS-590SG HF transceiver and its low power out leveled also with audio mic gain  (since the minimum nominal power output from that transceiver is around 5 watts,  too much drive in some middle - lower freq bands, into the RM Italy HLA 305 input,  so IMD is of the whole system).

RM Italy HLA 305 is one of the new models of the "Ham oriented" Power Amplifier line, as 10W out of the ANAN-10 alone sure not enough for the 80m Long Path, I thought to give it a try by placing the HLA 305 on the line.

To get 200W continuous serving it takes just under 2W up to a little over 4W of driving power, this to cover the Ham bands from 160 to 10 meter.

Several contacts were made on CW and phone, with good quality emission reported on this latest mode.

Matter of fact just the day before on 10m, I happened to talk to IK4AUY while he was using the HLA 305 and made a capture of his signal spectrum, which shows excellent attenuation of IMD3 (-38dBc).

However, this finding was also confirmed in the laboratory at the power of 200W. Here are some pictures of the set-up, where an inside view could not be missed, even though this may did cost us the warranty. 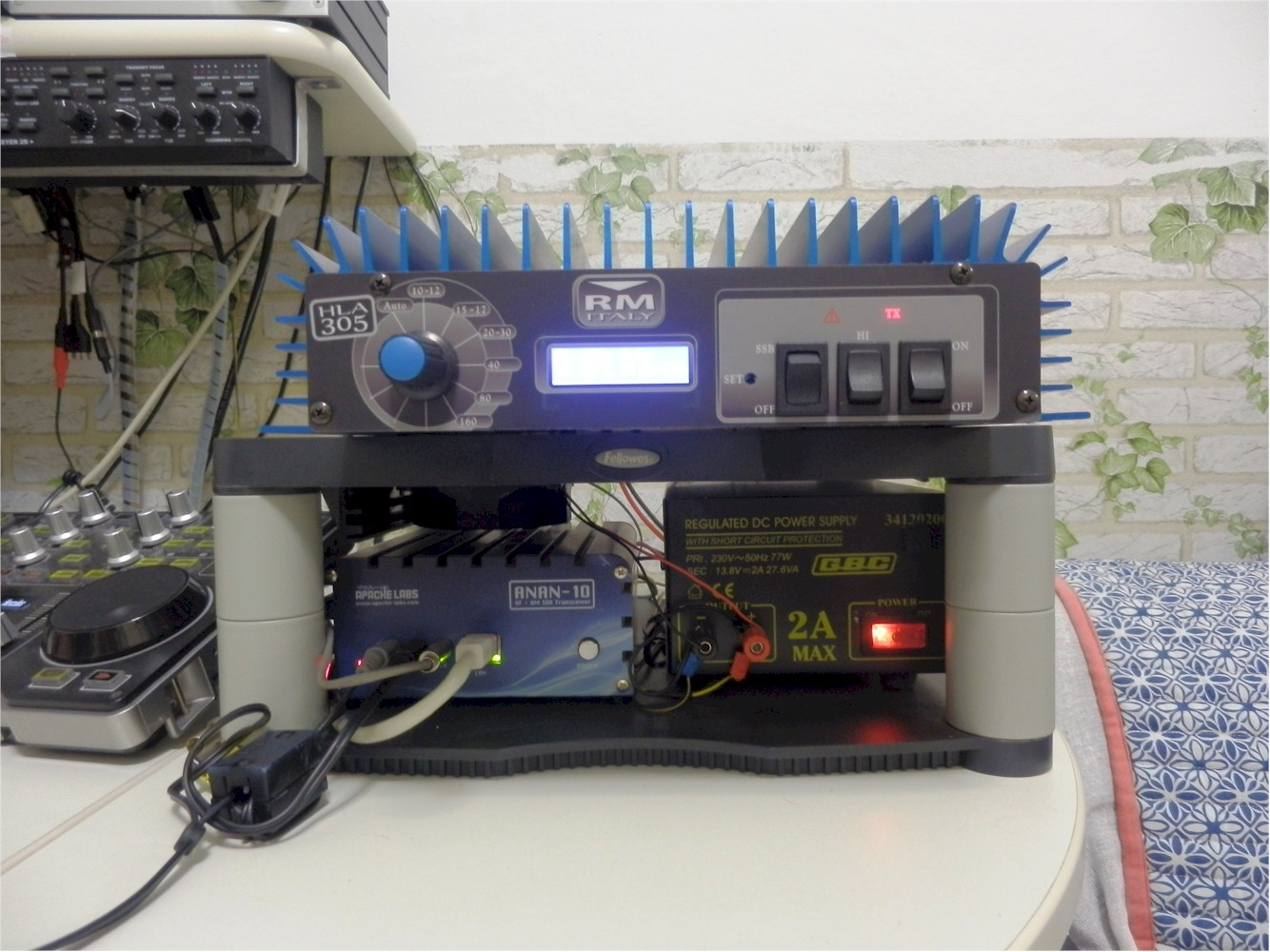 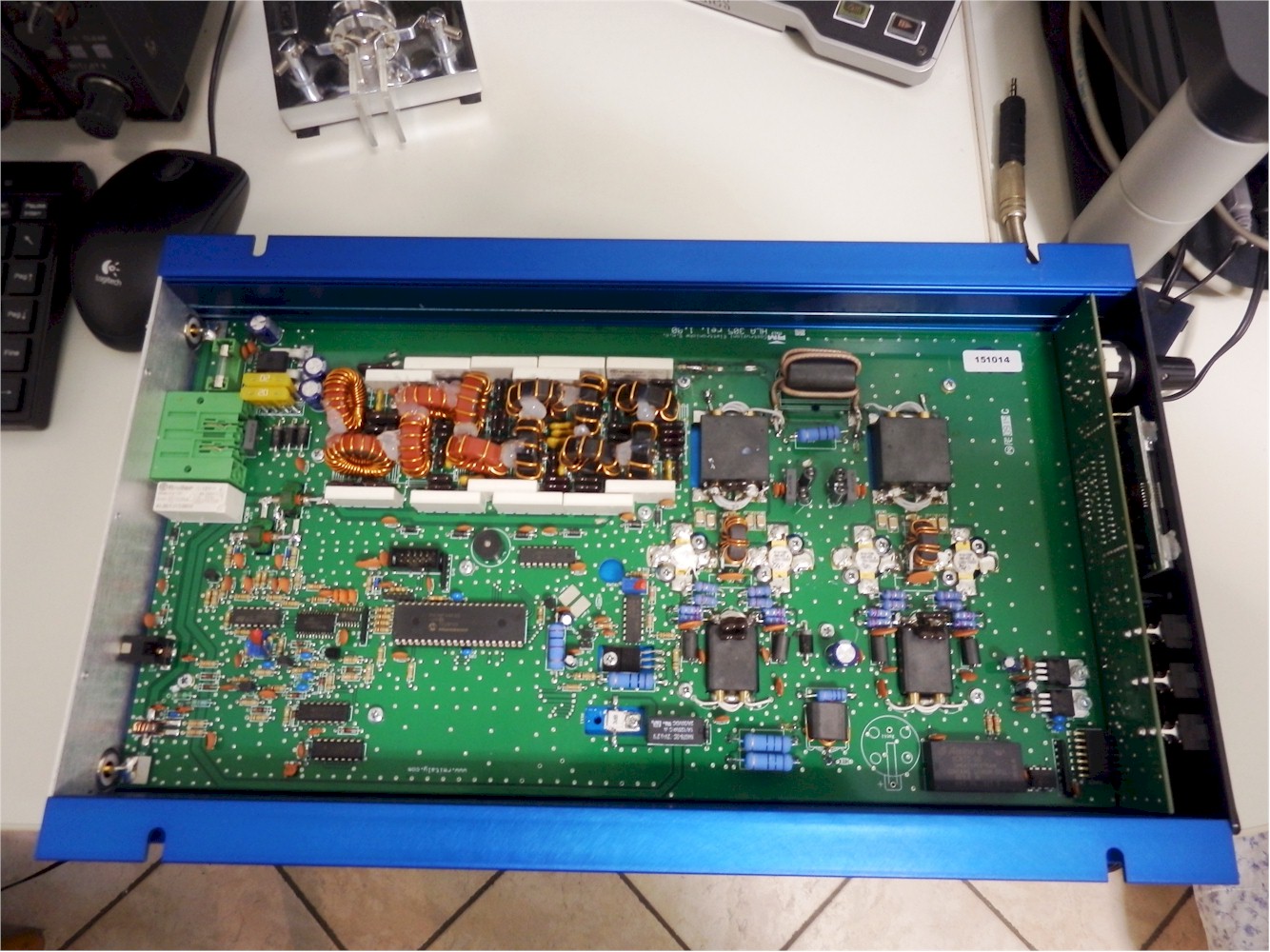 thanks again for your availability to the on air tests carried out at your qth where I could view live your sdr ANAN-10, a quite interesting equipment too.

Before the “on air” testing at Clay  QTH,  thanks to the loan from RM-Italy, which I have really to thank you for the opportunity given to us to be able to make both laboratory and on air tests at my QTH,  I could use it extensively with the special call  II4CDN allowed for 50years anniversary of  Medicina (Bologna)  Radio Telescope.  With the combination of TS-590SG and HLA 305  I have made, in December alone, more than 2 thousand QSOs.  I would say a good test on air. Here below the picture of my friend Clay, I4LEC, in his fine equipped ham radio shack (antennas and QTH position are so nice as well), you can see also: 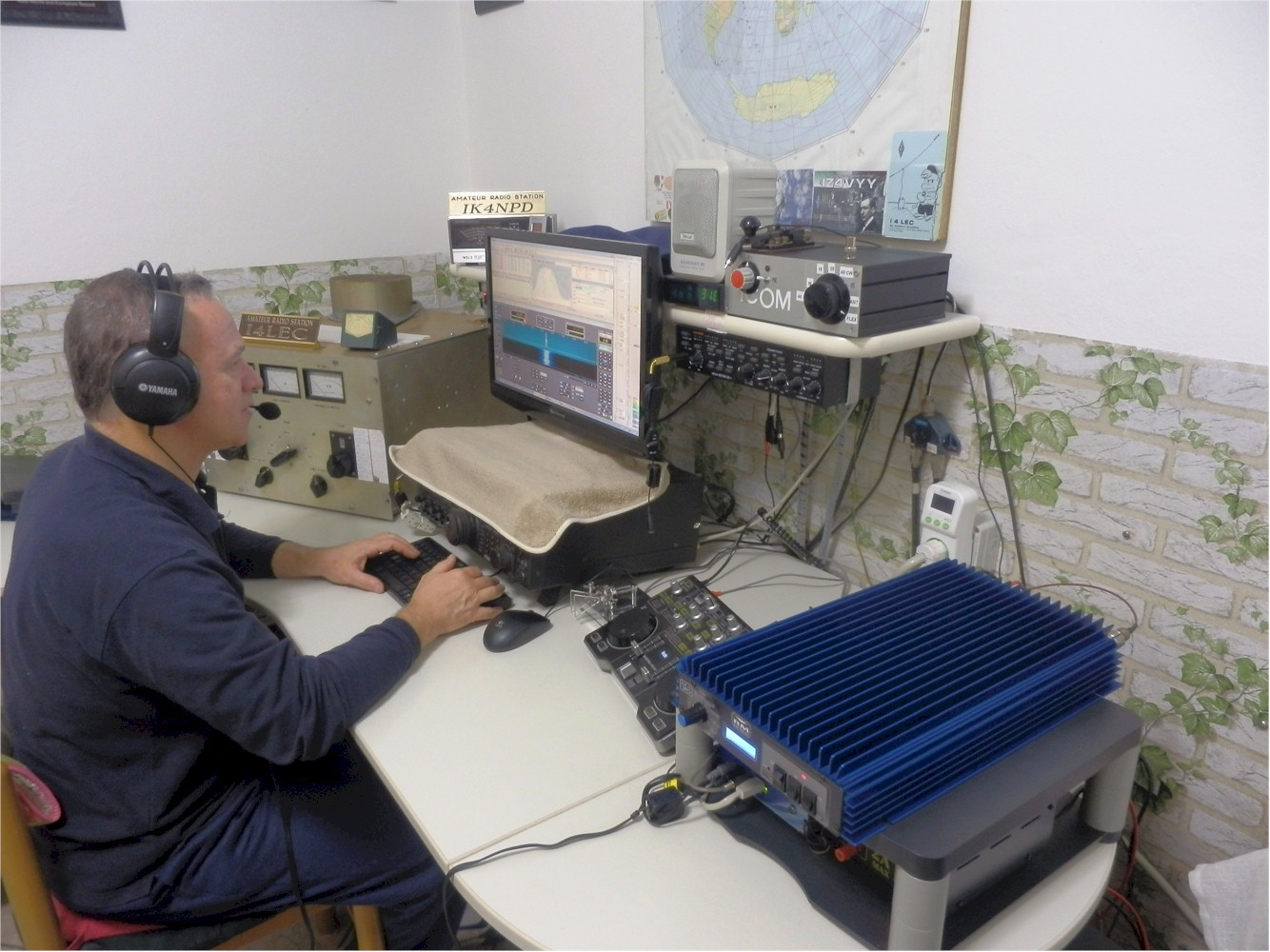 1) the console as a well known Master  DJ  of  Contests and DX, joking apart, the console is  very useful to use with SDR receivers and  SDR transceivers, already matched together with a Flex-1500  now with an ANAN-10 trx by Clay.

2) the blanket lying on the glorious IC775 (improved with the  rx mods roofing filter by I4SBX) still contends  the scene in the contests  as well together with the new SDR represent a very interesting combination.
The massive object in the corner, Claudio says that is too noisy, so he is evaluating the
advantages of a more compact amplifier .... Until next time, 73 de Sergio, IK4AUY.

For those who appreciate and like to see also the laboratory tests, with data visible in a
graphical format, so immediate and not commented by  many words, here I provided several images I captured with Marconi spectrum analyzer and a Bird RF coupler, on a Bird 50 Ohm  dummy load, the two tones test  is not performed directly at RF, but by injecting two audio tones into the microphone input of TS-590SG transceiver as driver (an audio level such that the ALC instrument reading  not moving at all, or very little, to calibrate the input power level to HLA 305 amplifier in order to have a given power output measured in PEP with the accurate vector wattmeter LP-100A, to simulate the real situation of my station:
-20meters band  with level out at 100WPEP, 150WPEP, 200WPEP
-harmonics spectrum with fundamental in 20meters band
-10meters  100WPEP comparable with the situation viewed from  Clay I4LEC ANAN-10  above.


-IMD 2Tone   of my TS-590SG output alone at level Pin input used to get 200W Pout to understand what was the starting IMD behavior at the amplifier input.

The attenuation of the  intermodulation responses  read directly as the difference between one
of the two carrier signals and the IMD itself, in dBc is the measure under  the so called "Military Standard A",  while  if to this dB data is added,  improved by 6dB (absolute) this one become the (more relaxed) commercial standard that  you usually see reported in the sales brochures  for a correct comparison.
In detail on this aspect  see the recall footnotes found in my article on Radio Rivista radio magazine April 2000, http://ik4auy.xoom.it/article_4.htm :
The standard measure of the IMD are:

a) in dB of attenuation in reference to each of the two equal tones desired, according to the
Military Standard (Mil-Std-1131 Version A - test method 2204B)
(-dBc)

b) in dB of attenuation in relation to the peak power of amplifier, pep, in the test with  two equals tones, according to the standard commercial EIA, followed by the majority of manufacturers of amateur radio equipment and as well  by ARRL laboratory in their tests of new equipment (Source: Test procedures manual - ARRL).


Following the latter method it gives  a value in dB of IMD response better by  6 dB since IMD is referenced to the pep level  of the two tones  which is  just 6 dB greater than the power of each tone, (eg. -30 dB. In the case a) is equivalent to -36 dB in case b).  In practice, the direct reading of the spectrum analyzer is carried out, with this standard, sliding vertically the two tones equal to a level of the screen positioned 6 dB below the zero reference, rather than 'on zero as in the case a) .

here is the image IMD DR 2T relative to 10 meters 100WPEP I forgot to attach the post above, 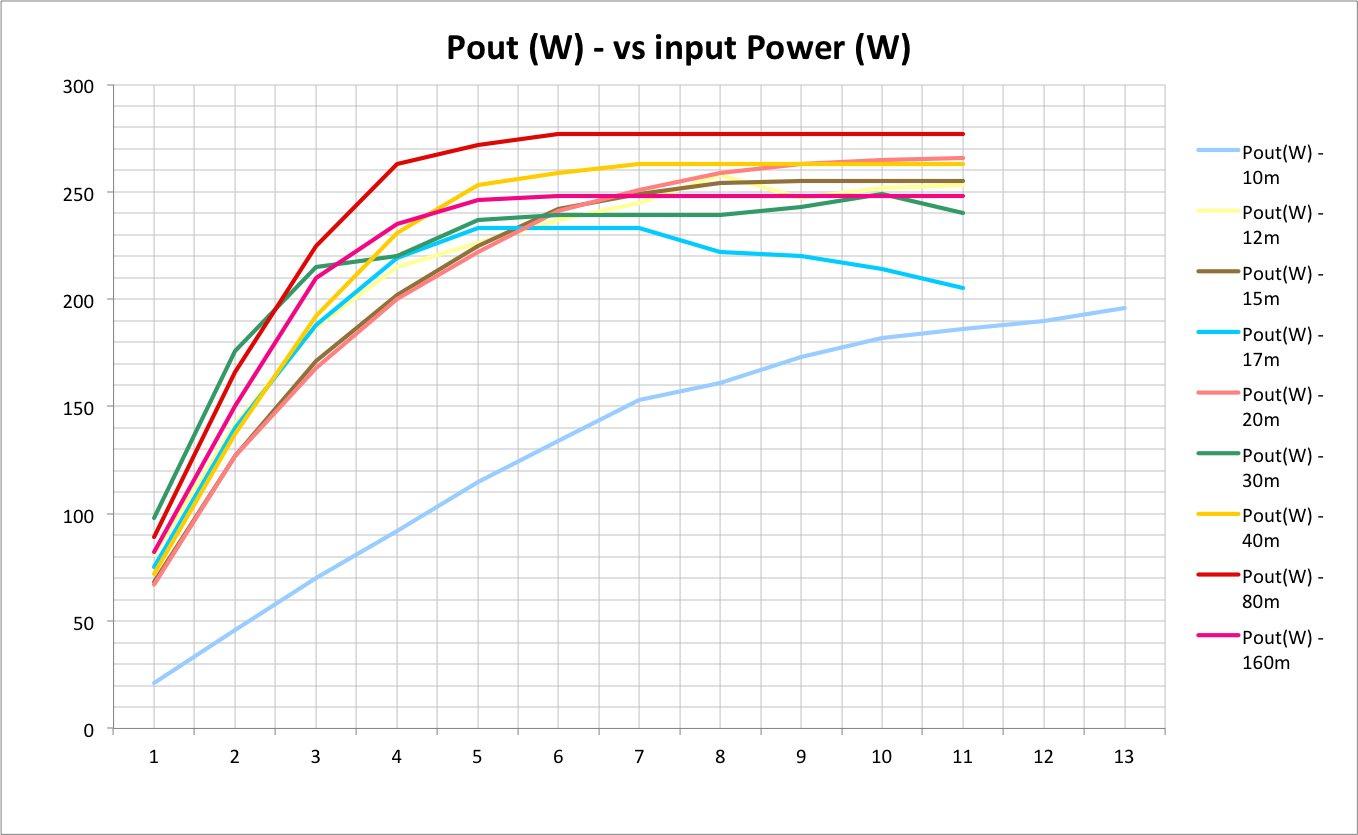